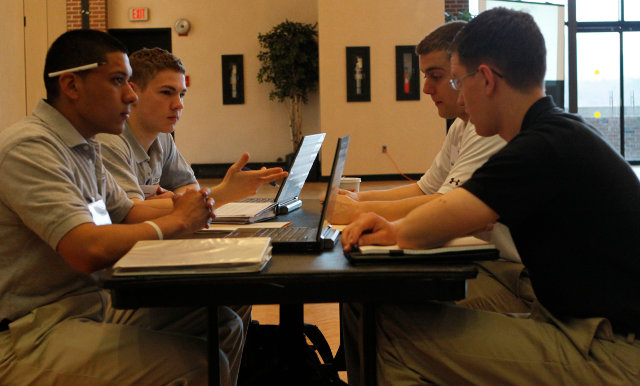 It is a common practice to build rapport before entering into a deeper conversation (Coupland, 2003). Often referred to as “small talk,” it is an opportunity for the parties to get to know each other on a personal level before getting down to a substantive discussion.  It seems that many people engage in this practice automatically as a cultural norm and to get over the initial anxiety of beginning a new conversation.

In a negotiation or other business dialogue, it is a highly advisable practice to begin with some small talk.  It helps establish rapport and a personal connection with the individuals at the table.  There is a significant potential upside that can be gained when s deliberate focus is applied to this early stage of a conversation.  People may be more open to seeking an agreement when working with someone they like and trust (Fisher & Ury, 1991).  We should use the time spent in building rapport to create the most amount of confidence and likeability.

People begin developing cognition-based trust and impressions about our character and motives within the first moments of an encounter (as cited in McKnight, Cummings & Chervany, 1998).  The use of small talk can be used to help foster good impressions in dialog participants (Bickmore & Cassell, 2005). Once these first impressions become established, a perception bias forms which is more difficult to alter in the future.

There are several excellent books on how to create great relationships with other people.  One of my favorites is Dale Carnegie’s book How to Win Friends and Influence People.  It is an excellent read and covers how to establish a positive rapport with other people.

A few key tips that have served me well over the years:

It is imperative that all emotions, interests, and enthusiasm displayed are genuine.  A person cannot fake interest very long before it is picked up by the other party.  A feigned lack of authentic interest may cause personal disengagement, distrust, and possibly resentment.

Being authentic and genuinely interested in other people’s thoughts and experiences builds a foundation for a strong working relationship.  It must be of genuine interest and not trying to manipulate their emotions as that will work against you.  This is not to say that emotional manipulation does not have a role to play in certain types of negotiations.  It does, but that occurs at a later stage and only under particular circumstances.

I have found that it is much easier to reach an agreement with someone you like and trust than someone you dislike or distrust.

Using the small talk time wisely, I have learned about other people and companies.  It has made a meaningful difference in reaching mutually beneficial agreements and forming strong and lasting working relationships with diverse groups of people.